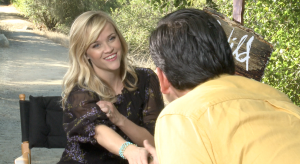 I had the pleasure of venturing into the wild of Beverly Hills recently. For a treacherous journey like that, I needed very good reasons to risk walking on a gravel path. But I did it because the payoff of my 300-yard hike was to sneak under white tents, surrounded by cameras and microphones, for sit down interviews with Reese Witherspoon, Laura Dern and Cheryl Strayed. We discussed the amazing new movie WILD.

WILD is the screenplay of Cheryl Strayed’s memoir, detailing the loss of her mother, the struggles she faced and the path to healing she chose, which was a daring 1,100 mile solo hike on the Pacific Crest Trail.

Watch: Cheryl Strayed | Behind The Scenes with Scott Carty

Reese Witherspoon plays Cheryl in the film and delivers an award-worthy performance. She’s already landed SAG and Golden Globe nominations for it. I assure you, there are more nominations to come.

Watch: Reese Witherspoon | Behind The Scenes with Scott Carty

Witherspoon reveals a gritty new side to her range as she channels Cheryl’s experiences with heroin and multiple sex partners. And, yes, this is the role where Reese performs a sex scene and goes topless on screen. Fortunately, Director Jean-Marc Vallée (Dallas Buyers Club) used those moments with discretion and kept them relevant to the story.

Once Reese hits the Pacific Crest Trail, struggling to stand with an overloaded backpack nicknamed “Monster”, she takes us on a journey most of us can relate with: taking steps to find peace after loss. In this case, it’s the portrayal of Cheryl Strayed struggling to find herself after the passing of her young mother.

Laura Dern plays Strayed’s mother and shares insight to a woman with thoughtful joy and hope through a terminal illness. She’s a bright spark to the movie and keeps the story grounded.

Watch: Laura Dern | Behind The Scenes with Scott Carty

When I spoke with Cheryl Strayed about the story, I held back emotion. I told her how I had lost both of my parents before I turned 40. We talked about how you never really get over losing a parent. In our case, you especially never get over losing your mom.

Cheryl told me about the journaling she did on her hike and how she used that to fully craft the story years later. She also told me how much of a thrill it is to see Reese playing her on the screen, saying it “delights” her. And it should.

Much of the movie was filmed in the Portland area and features a number of local actors. In fact, as I screened this in a theater on the FOX lot in Hollywood, a friend of mine popped up on the screen, face-to-face with Reese in a very poignant moment. Her name is Debra Pralle and you’ll see her as the Shop Owner in a scene in Ashland, Oregon. You’ll also see Tony Doupe delivering a fresh pair of boots to Reese.

If you’re up for a soul-searching journey and you want to see an amazing performance, I can’t recommend WILD enough. Reese Witherspoon has traveled into new territory with her role as Cheryl Strayed.

I hope WILD inspires you as much as it inspired me.