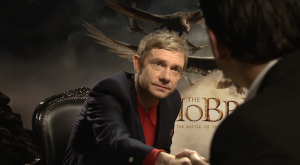 The finale of The Hobbit trilogy is now in theaters. Finally!

Step back and think about what Peter Jackson and his Producers have done with the fantastic stories from J.R.R. Tolkien, turning The Lord of the Rings and The Hobbit into a total of six spectacular films.

It has been a journey to Middle Earth that has taken 16 years. Think about that. Sixteen years! That’s elementary school and 4 years of college. That’s about 8 times as long as most 20-somethings stay at a job. That’s going from fetus to drivers license. That’s commitment!

In the finale, The Hobbit: The Battle of the Five Armies, Peter Jackson has somehow saved the best for last.

I have never worn elf ears. I have not read The Hobbit – I’ve started it, but the book is just not my thing. I probably will never wear elf ears or read The Hobbit. But I will highly recommend The Hobbit: The Battle of the Five Armies because it’s a ton of fun to watch.

After making their way into the mountain and pissing off the Dragon Smaug, the Dwarves find themselves wallowing in gold and getting bossed around by Thorin Oakenshield to find the Arkenstone. Thorin is not making any sense due to suffering from dragon sickness and it’s really rattling Middle Earth, despite the best efforts of Bilbo Baggins to reason with him. So, guess what happens. A battle! Of five armies.

Before you see one of the most epic battle scenes on screen, you get every bit of facial hair singed by an opening visit from one very angry Smaug, as he torches Lake Town and mouths off to Bard the Bowman (Luke Evans). The opening scene is a wild, very exciting ride, so make sure you’re in your seat for the start.

I couldn’t stand An Unexpected Journey. I enjoyed Desolation of Smaug. And I love The Battle of the Five Armies!

The finale is the shortest of all 3 movies, coming in at a slim-for-Peter-Jackson 144 minutes. While I could have lived with just 3 or 4 armies, to keep things moving, you do get all 5 and that throws a bit of a drag on the pace. Nonetheless, you’re treated to action and dashes of comedy in a 50 minute battle you’ll never forget.

You won’t find me swinging my sword around at this in any attempt to slash the work. I have great respect for the commitment of Peter Jackson and I’ve had the absolute pleasure to visit with Martin Freeman, Richard Armitage, Evangeline Lily and Luke Evans in 2013 and 2014.

Set your mind free and pay extra for 3D. The Hobbit: The Battle of the Five Armies is absolutely worth your money.

I’m in the Forefront