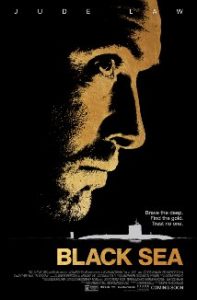 I didn’t realize it until the other day, but I really needed a good submarine movie.

Once I was scheduled to screen BLACK SEA, starring Jude Law, I couldn’t stop thinking about THE HUNT FOR RED OCTOBER with that fine Scotsman, Sean Connery.

I remembered the intensity of that movie and the suspense of their situation. I could feel claustrophobia cooking back up just thinking about being in a sub, underwater, for days upon days.

But could BLACK SEA stand up to Red October? I was skeptical.

BLACK SEA is about a team tasked with finding an abandoned Nazi sub that is filled with gold. With Jude Law playing their Captain, the team finds a run-down Russian sub in need of quick repair. Before you know it, the half British and half Russian crew go under to claim their equal share of the gold.

Equal share? A bunch of dudes in a submarine and you don’t expect me to think they won’t get strategic on some simple ways to increase the size of their shares by reducing the size of the crew?

Fortunately, BLACK SEA actually does expect me to think that. And the screenplay by Dennis Kelly works that expectation very well, bringing about the obvious and balancing it with plenty of intense surprises.

The close confines of the submarine pull you into the story and jolt you from floor to ceiling. It caused me to flinch plenty, even after enjoying a glass of wine beforehand at SIFF Uptown Cinema.

I wasn’t expecting to like it, but I ended up really enjoying it.

As your Captain, I order you to see BLACK SEA.