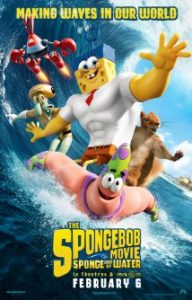 Until now, he’s lived in pineapple under the sea. But is it time for SpongeBob to come out of water and appear in 3-D?

SpongeBob is on the big screen in a way we’ve never seen him before. In THE SPONGEBOB MOVIE: SPONGE OUT OF WATER.

This 3D journey matches animation with live action from Burger Beard, played by Antonio Banderas. When I visited with Banderas in New York, he old me that most of his time on the set was spent talking to himself, since he couldn’t see or hear any of the animated characters.

And those characters are played by the same guys who have voiced the roles since the late 1990s.

Don’t go into SPONGEBOB thinking you’re in for some highbrow intellectual enrichment. It’s SpongeBob, for crying out loud. Go in and expect to have some fun, especially if you’re a long-time fan.