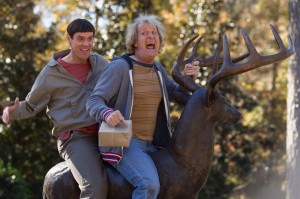 Sometimes you just have to turn your brain off and laugh. Laugh until you have tears streaming down your cheeks. And then fall into hysterical laughter on the way home, while at a stoplight, next to a bus stop filled with people staring at you. And then freely admit your deepest, most intimate feelings about DUMB AND DUMBER TO. And laugh some more, thinking about how incredibly funny Jim Carrey still is.

I realize you may be reading this and wondering, “Really. Is it THAT funny?” And that’s completely fair to ask. It’s DUMB AND DUMBER TO. It’s from the twisted and calculated minds of the Farrelly brothers (Peter and Bobby) and it delivers laughs, twists and turns for plain old fun. As Lloyd (Jim Carrey) and Harry (Jeff Daniels) search for Harry’s accidental daughter, Penny (Rachel Melvin), they find their way into some very hostile territory that I’ll leave you to discover on your own. There’s a lull in the movie as the boys roll through a part of their adventure, but I took that as an opportunity to catch my breath from the earlier laughs. DUMB AND DUMBER TO stands on its own from the first version, but the characters are incredibly consistent. Jim Carrey’s performance as Lloyd makes you wonder if time has stood still. He has barely aged. That can’t be said for Jeff Daniels, though. Set a time for happy hour and then check your brain at the theater door for a great time with DUMB AND DUMBER TO. Rated PG-13. http://www.dumblr.com/ 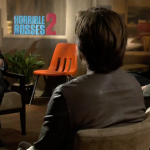