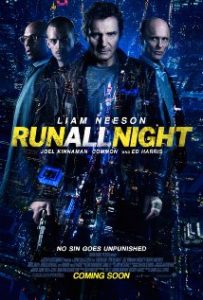 Going into RUN ALL NIGHT, I knew a couple of important features that any of us can see in the trailer. First, it stars Liam Neeson. Second, it stars Liam Neeson with a gun. That can be viewed as smart, delivering what fans love in a Liam Neeson shoot-em-up movie. It could also be risky, unimaginative and boring. Ah, but RUN ALL NIGHT is anything but boring. In fact, it’s a very good movie! And the casting makes it even better.

Liam Neeson plays the absent father of Joel Kinnaman’s character, a limo-driving Dad who is trying to build a clean and honest life for his own family. The two reunite when the son gets framed and Ed Harris’s character wants him killed.

RUN ALL NIGHT definitely delivers on the action and intensity. But, more importantly, it smashes expectations with an incredibly solid story. It’s emotional, gritty and gives us the chance to see Ed Harris and Liam Neeson on the same screen together. 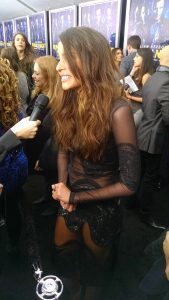 Genessis Rodriguez is also in RUN ALL NIGHT. While we know her as stunningly beautiful, don’t expect to see the sexy side of Genessis in the film. She plays the wife of Joel Kinnaman’s character, fearing for her family’s safety. When I talked to her at the World Premiere in New York, I asked her about maintaining a drab and stressed appearance in the movie. She told me she actually enjoyed the role because it didn’t focus on her looks. She delivers so much through the part that I promise you’ll hardly recognize her!

RUN ALL NIGHT is rated R for the violence and other seedy scenes. But, wow, is it ever a fun movie. I highly recommend it! 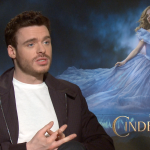