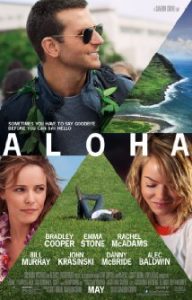 Apparently, I wasn’t in nearly as bad of a mood as many of the Critics who are angry they don’t have a tan and can’t hang loose. I actually enjoyed Cameron Crowe’s new movie, ALOHA.

ALOHA gives me more reasons to love Bradley Cooper and Emma Stone. It also gives me another reason to love Cameron Crowe’s passion for pairing his films with kick ass soundtracks.

As a self-declared Hawaiian who WILL live in Hawaii someday (I’ve told myself that since I was 13 and will continue to until I’m wrapped in tea leaves and left in the Pacific off the shores of Kona), the start of ALOHA grabbed me with vintage film of Hawaii’s yesteryears. Crowe shows classic Hawaii, showcasing what American’s pictured, as it became our 50th state in 1959. It sets the table for the culture, traditions and the magic of Aloha.

We then go into orbit, with images of satellites amidst the stars.

And then we come back to Earth, with Bradley Cooper as a civilian/former military contractor aboard an Air Force cargo plane, landing in Hawaii with pilot John Krasinski.

In the early moments that follow, ALOHA sets up a possible love triangle, a highly confidential undertaking and a tropical adventure mixed with comedy, order, sexual tension and Hawaiian traditions.

The chemistry between Emma Stone as an Air Force Captain assigned to escort Bradley Cooper’s character is sharp from the start, with Emma delivering crisp guidance and questions to a distracted, annoyed Cooper. It allows you to hope it might go somewhere while believing it probably won’t.

As a billionaire space technology tycoon, Bill Murray is cool and captivating. He’s mysterious, chill and arrogant, as he leverages his wealth with the U.S. Military.

Alec Baldwin enters ALOHA as an Air Force General. His acting for a powerful, egotistical, in-charge character is predictable, but it’s effective and comes in just the right dosage.

Finally, John Krasinski, as a pilot who flies secret missions, and his character’s wife, played by Rachel McAdams—a former girlfriend of Cooper’s character–showcase a married couple like many: stressed and struggling. Cooper’s arrival complicates that.

ALOHA is a story of relationships, respect, looking back and looking forward. It allows you to laugh, it maintains intrigue and it’s a true delight for your ears with music ranging from traditional Hawaiian to Claire de Lune to Wheels On The Bus to pop and rock.