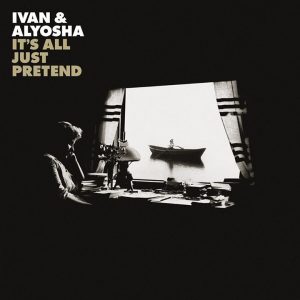 You’re about to experience an album that has been a long time coming.

It’s an album that has tested resolve and determination and true artistry, along with hunger, humility and hope. It started in 2007.

In a world where risks aren’t taken often enough, it is refreshing to see a group of genuinely good men push through, to share a sound we all need. They are a mix of fathers and friends. They are faithful, but fearful of what might not happen as a result of the years they’ve invested.

Ivan & Alyosha has done what is necessary to keep families afloat while pursuing dreams. To most, they’ve appeared successful and strong. But it hasn’t been easy.

Tim and Pete Wilson have pushed their brotherhood into marriage and fatherhood, while remaining friends to Tim Kim, Ryan Carbary and newest member, Drummer Cole Mauro.

Tim Wilson fronts Ivan & Alyosha with thoughtful vocals that make you wish you could sing the way he does. He is a family man with values that work their way into the band’s lyrics, without beating you over the head. Find a way to share a whiskey with him and you’ll realize Tim is a guy who wants good, will work hard and who shares success. Plus, he’s an incredible husband and father – the kind guy’s respect.

The new Ivan & Alyosha album, It’s All Just Pretend, challenges you from the start with “Something Is Wrong.” The isolated drum hits are the first reminder with the difference Cole Mauro has made for the band. Then there’s the bass line. And then, the lyrics: “Things got real, I ran. Wondering if I had what it takes to be a man.” It leads to “The only fear I had was hearing half of the story.” Go ahead. Soak that in. Read it again. It all rolls beautifully into the chorus of “Yeah, freedom is where we are standing. Something is desperately wrong.”

Track two continues a tone that has you questioning the pain this band faces. “Bury Me Deep” is a reminder of why you should listen to an album from start to finish, just as you’d read a book. Like a great U2 transition, guitar grips you and they get right to the story as Tim Wilson sings, “Don’t blame a Doctor for giving me those pills. Don’t blame a mother for holding my hand at the hill. Don’t blame childhood friends for speaking their minds. I’ll take it all. I’ll take it all, I will.”

As you find your way into the third track, “All This Wandering Around”, you realize I&A are fully into new territory with this album. “Where I belong. What I believe. I’ve been looking for something to carry me” is part of the chorus and it’s just the beginning of what this song conveys. It continues through “What is wrong. And what is right.” Take your time with this one and feel free to let loose, dancing around with reckless abandon.

In their title track, “It’s All Just Pretend,” the band taunts you with “If you cry, make sure that they can’t hear.” Then it validates you and tests your faith with “If you find yourself somewhere between down and belief. Remember. Remember to think on your knees. Never trust that man who’s been smiling all his life. His fears will catch-up in the end. He’s standing tall, while the rest of us are blind. Oh, brother, it’s all just pretend. It’s all just pretend.” “And if you run, run so nobody can catch up. And if you drink, you better see the bottom of that cup. And if you lose your mind, make sure your friends can get it back. And can you find all the beauty in the pain that we have?”

As you make your way to the 5th track, “Tears In Your Eyes,” you’ll hear sacrifice. You’ll hear the pain and challenge of being an artist. And I hope you’ll respect it. This is a track I don’t need to explain. It’s simply a song you need to listen to. You will absolutely get it when you hear it.

The album continues through 13 tracks that show a variety of musicality—ranging from mixes with horns to a an edgy ride with their 8th cut, “Modern Man.” And that could be the hit radio and fans push forward. It’s too difficult of a decision to make!

There’s one track on the record that was recorded three years ago, in one take, by the band. It’s track 11, “Don’t Lose Your Love” with lyrics of “Don’t ever lose your innocence. Don’t you lose that heart. Don’t you lose that confidence. Oh, but most of all, don’t lose your love.” It’s a song of a parent’s wonderment as they stare into their child’s eyes—with hope, love, commitment and perspective. I heard the band play this song, live, at least a year before this album came out. Over lunch one day, Tim—with his son Henry spilling lemonade on the table and his baby boy Cash asleep in his arms—explained that he and Ryan Cabrary recorded this song in one take. One take of perfection, complete with the raw sounds of fingers sliding along guitar strings. It’s a single track that reveals risk and takes you to a beautiful, emotional place.

Enjoy this album. Challenge yourself as you listen, but enjoy it.

Then make sure you go see—and meet—Ivan & Alyosha as they roll across America. And, if you feel so inclined, treat them to a Jack Daniels. They’ll be more than appreciative.

No images found!
Try some other hashtag or username