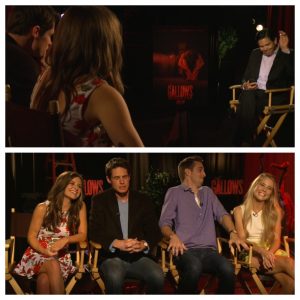 THE GALLOWS will scare fans in theaters this weekend, as four teens get trapped and terrified in their school auditorium for a night. A school that really has “its Spirit.” I had a chance to sit down with the cast and the Writer/Director/Producer duo of Travis Cluff and Chris Lofing at Hollywood High School recently. That’s where I learned how this film got “discovered” through a trailer on the Web. Now, it’s being distributed by Blumhouse and Warner Brothers, four years later.

THE GALLOWS was shot with a young cast going by their real first names. They told me that even THEY were scared. The entire movie is shot from a single camera angle to pull you into the scares. It’s only 81 minutes long. There’s no nudity or swearing or innuendos or gore. So why isn’t it PG-13? Great question. I think it should be, but it gets an R for the fear factor.

I say, go give yourself a summer scare. Go see THE GALLOWS.