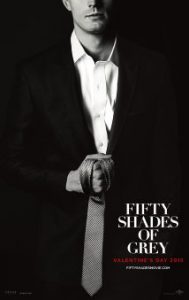 In the words of the great George Michael, “Sex is natural, sex is fun. Sex is best when it’s one-on-one.”

Clearly, George knew back then that sex is NOT best when it’s in a theater full of giggling, possibly desperate, gullible, giddy, restless fans of FIFTY SHADES OF GREY.

This is Scott Carty, reporting to you after one of the most annoying screening experiences I’ve ever endured.

After I took my seat for FIFTY SHADES OF GREY in Seattle, just a couple of blocks from the Escala condo building, I found myself wedged in-between two dudes—one was double my size, the other was half my size; and I’m referring to height and body mass, people. The ladies and a few gentlemen who had been waiting in line with eager delight made their way in. It was a scene like the Running of the Brides Wedding Dress sale at Filene’s Basement. It reminded me of the Nordstrom Anniversary Sale. I kept looking around to see if Oprah was there or something.

Carly Simon’s “Anticipation” was playing in my mind. Anticipation was on the edge of our atmosphere.

So many cell phones were lit up, I felt like I was at a U2 concert and Bono had just made a passionate plea to save people in a drought-stricken nation.

It was going nowhere good.

And then the movie started.

Just a reminder: I review movies. I don’t review books that become movies. I’m not here to compare the movie to the book. I’m just reviewing…the movie.

With Jamie Dornan trying his hardest to be Christian Grey and Dakota Johnson as a somewhat appealing Anastasia Steele, the story of the successful businessman and the Washington State University student rolls right into the moment they first meet—when Anastasia Steele covers her roommate and travels to Seattle to interview Grey.

We find out Christian Grey is remarkably unlikeable, but Jamie Dornan takes it so over the top that all you see is Jamie Dornan trying to be a complete douche. Advantage Jamie.

Dakota Johnson does deliver a good performance, balancing curiosity with confidence and desire with determination. She brings comedic relief at times and she shows the strength of a real woman who makes her own choices.

There are moments where the sex scenes are intriguing, but the premise of Dornan The Dominant gets in the way of this guy being able to let go and escape into any of them. There’s just nothing fun about watching a naturally beautiful Dakota Johnson, realizing the real Grey character is going to rear his ugly ways.

I think sexuality is something that does need to be discussed more openly in our society. The good old USA still guards it as a taboo topic compared to other countries around the world. The fact that so many people had to bury their faces in the books, in private or in giddy book club groups for safety-in-numbers, shows shameful desperation.

I don’t get the whole Domination crap. I don’t care to. And I don’t care if consenting adults are into it. That’s their deal.

I do have concerns about the notion of abuse, though. Thankfully, the Anastasia Steele character stands her ground on her choices. I liked seeing that. I fear for those who are lured into similar situations, but don’t have the self esteem to say, “Stop!”

For the record: If anyone ever asks me to go to their playroom, there better damn well be a well stocked bar and a big screen TV in it. It shouldn’t look like a torture chamber.

If you’re going to go see FIFTY SHADES OF GREY in a theater, act like you’ve been out in public before. Turn off your phone. Be quiet. And keep your hands visible at all times.